What makes each species unique? In the Carvunis lab, we study the molecular mechanisms of change and innovation in evolution. This involves thinking about how genomes change over time, what cellular processes enable these changes, and how novel molecular networks emerge. We consider evolution in the light of systems biology and systems biology in the light of evolution, in order to gain a better understanding of how cells and organisms live and evolve. The research tools we rely on most are bioinformatics, yeast genetics and genomics. Generally, we strive to foster an interdisciplinary and collaborative research environment where researchers can develop creative approaches to describe, engineer and predict the genetic and network-level determinants of species-specificity and the emergence of new genetic elements.

Where do genes come from?

It has become clear over the past decade that completely novel protein-coding genes can evolve de novo from the “dark matter” of the genome (non-genic sequences). We are investigating a hypothesis according to which such de novo gene birth involves the existence and translation of transitory genetic elements called  “proto-genes”. Our work has shown that cellular networks involve many more biomolecules than we thought, and questioned how translation is regulated. We are now actively investigating how these proto-genes evolve and acquire novel functions. Recent results show that yeast proto-genes can provide a growth advantage to the cell upon overexpression, largely due to the presence of transmembrane domains that arise naturally from non-genic sequences. In another study, we analyzed yeast, fly and human evolution, and determined that most species-specific genes cannot be explained by sequence divergence, although the fraction that emerged de novo remains to be determined. To learn more, check out our recent review (also a Wikipedia page!).

How do cellular networks change?

As ‘omics data is becoming increasingly available for many species, we are able to start correlating genomic and network changes over time by developing “comparative interactomics” approaches. In doing so, we uncovered evidence that the rewiring of transcriptional networks in mammals, birds and insects takes place at the same rate over time, which is extremely surprising given the huge differences in reproduction and mutation rates between these animal classes. It is as if there was a transcriptional molecular clock shared across animals. Recently, we uncovered conserved epigenetic networks that translate human aging to dog aging. We are investigating the implication of these findings.

What does function mean? 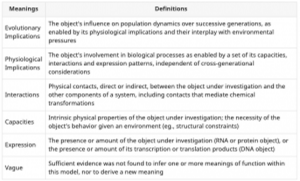 Function is a word that has been used in the context of biology to mean a range of different things. The discrepancy caused by different interpretations of ‘function’ was first evident when the ENCODE project claimed 80% of the human genome was functional using biochemical evidence, while evolutionary evidence would suggest that only 10% of the genome is functional. Part of our research involves collaborations with philosophers and rhetorical scholars (see here and here) with the aim of clearly distinguishing different meanings of function and educating researchers on usage of this term.

We aim to develop computational approaches for “looking” at evolution from a whole genome and whole cell perspective. In particular, we work on high-throughput screening of microbes, dating genetic changes in phylogenies, and comparing cellular networks across species. We would like one day to be able to ask questions about biology like we use Siri in the iphone to ask questions about where to go for dinner. One of our long-term goals is to build an intelligent system for translating molecular information between human patients and model organisms, in order to guide progress in biomedical research.